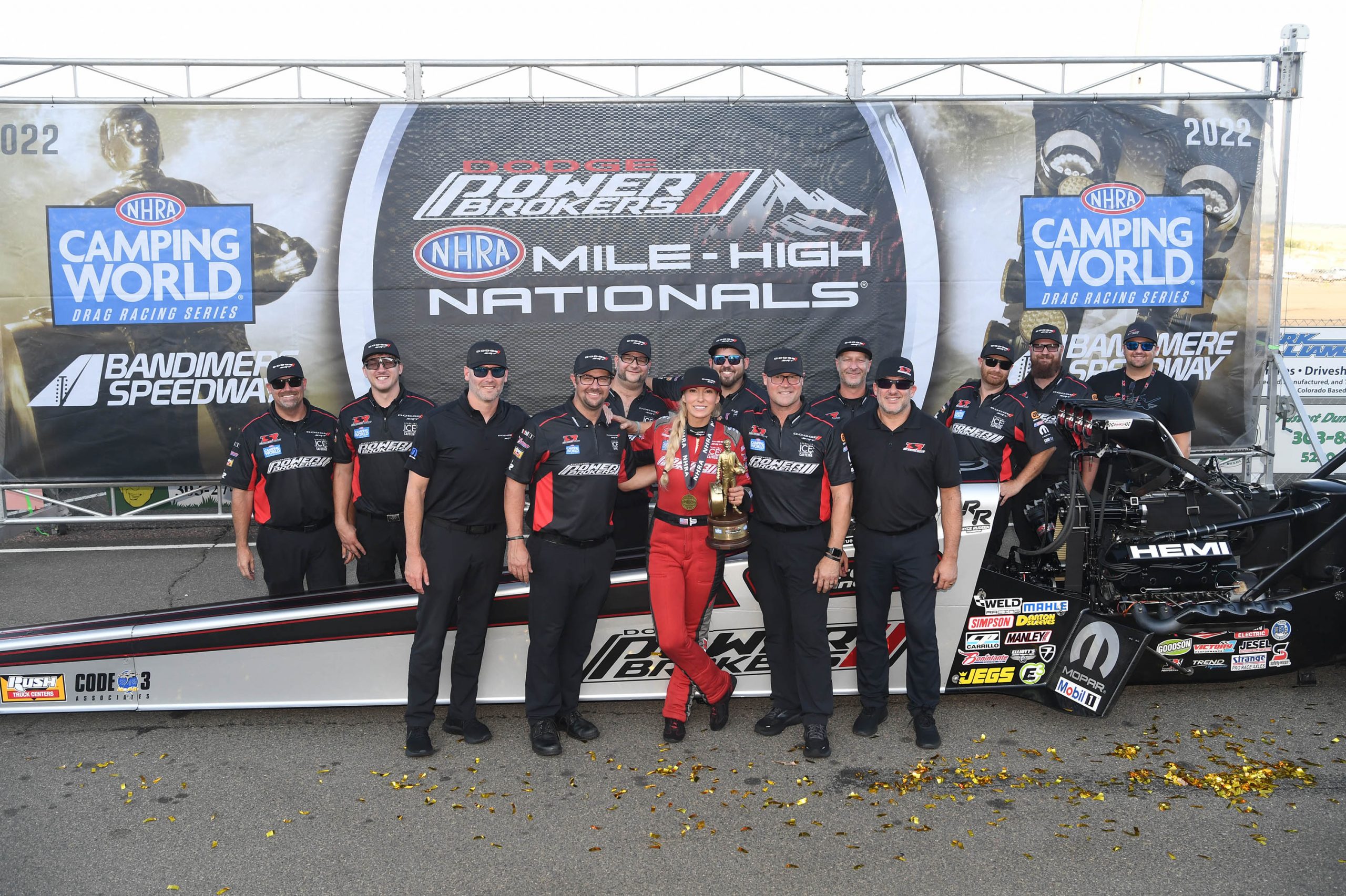 “Congratulations to Leah Pruett on powering her Dodge Power Brokers Top Fuel dragster to her 10th career win and Tony Stewart Racing’s first Top Fuel victory at our headline event,” said Tim Kuniskis, Dodge Brand Chief Executive Officer - Stellantis. “Leah’s victory today demonstrates the hard work, dedication, and tenacity that she and her team put into every race, the kind of performance that Dodge//SRT is known for, and what enthusiasts can expect from Dodge Power Brokers and Direct Connection.”

Pruett’s victory, her second (2018) at the picturesque dragstrip known as Thunder Mountain, was her first with her new team and solidified her place in the Top Fuel Top-10 by jumping from tenth to sixth place in the championship standings.

Pruett began her drive to conquer the mountain from her third place position on the eliminations ladder and a solid opening round win over No. 14 seed Antron Brown. She went on to turn on win lights in the quarterfinals after both she and No. 6 qualifier Clay Millican hazed the tires at midtrack.

In the semifinals, Pruett had a lightning fast reaction time of 0.015 seconds against No. 2 qualifier Justin Ashley on her way to recording her quickest run of the day with a 3.879-second elapsed time run at 317.94 mph to advance to her first final elimination this season and the 19th of her career.

What could have been an exciting final round battle against No. 12 seed Shawn Langdon turned into a solo run after her opponent’s dragster broke on the burnout. Pruett, however, opted to demonstrate her Dodge Power Broker dragster’s performance and show fans just how much progress the team has made this year with a stout 3.884 second elapsed time run at 316.38 mph to leave no doubt in her team’s ability to win.

“This is everything,” said Pruett of the Wally trophy she held in her arms. “This being the Dodge Power Brokers (MIle-High) Nationals we brokered that Dodge power all week long. My crew has been flawless all weekend long and couldn’t be more proud to do this in front of these Denver Fans. I’ll say two things; this view never gets old. Also, this is the first Top Fuel win for Tony Stewart Racing and that will also never get old.”

TSR Funny Car driver Matt Hagan, who has three wins of his own this season aboard the Dodge Power Brokers Charger SRT Hellcat, came into the weekend looking to repeat his 2021 performance at Bandimere Speedway when he powered from the No. 1 qualifier position to his first coveted win at the Dodge Power Brokers Mile-High Nationals. The defending winner looked poised to do that after topping three of four qualifying sessions on his way to securing the No. 1 qualifier position for the second consecutive year and his fourth of the season.

In the opening round of eliminations, Hagan lined up his Dodge Charger SRT Hellcat next to No. 14 seed Jack Wyatt and was first off the starting line when his ride began to lose traction. While he attempted to pedal it, he wasn’t able to regain control quickly enough and saw his hopes of advancing go up in tire smoke.

Despite the rare first round loss, Hagan remains second in the Funny Car standings and within 95 points of his rival Robert Hight who won the 2022 Dodge Power Brokers Mile-High Nationals event title.

After having earned a spot in the top half of the Funny Car eliminations ladder in every event this season with his Snap-on Tools Dodge Charger SRT Hellcat, Cruz Pedregon had a bit more of a challenging time on Thunder Mountain through qualifying and landed in the ninth spot to start his race day. The two-time Funny Car event winner at the Dodge Power Brokers Mile-High Nationals lined up next to No. 6 seed J.R. Todd for his opening round pairing but had a cylinder out that ended his day prematurely. Pedregon drops one spot to sixth in the Funny Car points battle with five more events remaining before the “Countdown to the Championship” playoffs series begins.

The next stops on the NHRA’s three consecutive event western swing are at Sonoma Raceway in California for the Sonoma Nationals July 22-24 and then Pacific Raceways for the Northwest Nationals near Seattle, Washington, July 29-31.

“This is absolutely everything. We have the best fans in the entire nation. This is my favorite track. I’ve been trying to be emotionless all day just to do my job, but this is for Neal Strausbaugh (crew chief), Mike Domagala (co-crew chief), Ryan McGilvry (car chief), and my entire Dodge Power Brokers crew that has been flawless all weekend. I told you guys a long time ago it was coming and I couldn’t be prouder than to do it at a place like this. Thank you, Bandimere. This is the first Top Fuel win for Tony Stewart Racing, so hearing those words will never get old. For those that don’t know, Tony won his SRX race last night. We wanted to keep the wins in the family and get another win, so that was great. What you guys are seeing here is pure gratitude for my team and the belief that Tony has had in us. We’ve had a tough season so far, but the team is optimistic and this is deserved long-term goals and you’re seeing the short-term results of it.”

“We had a really great race car this weekend. It was nice being able to qualify No. 1 on the mountain. Going into the first round, we really weren’t expecting to smoke the tires like that. We really tried to pull things back to make things favorable for the race car. Obviously the mountain had a different idea about how things were going to go up here. We smoked the tires and I gave it a good peddle job for a while and gave up the ghost up there. Jack Wyatt is an underdog that you cheer for, so it’s nice to see him go some rounds. We hate it because we wanted to get Dodge a win, with this being their race. We were in a great position to do that, but the racing gods didn’t have it in store this weekend. We’ll make some adjustments and move on to Sonoma and Seattle.”

“These cars are finicky and we just never got on the right track. We're fighting cylinder dropping and I don't have any answers mechanically, but I'm confident that (crew chiefs) John Collins and Rip Reynolds will look at it and figure some things out. My goal is to test up here before next year. I just want to make some runs cause it's so different up here than at sea-level.

“Every run could be the run to get us back on track, but it just wasn't meant to be today. I've come up here and had the body in ten pieces and four or five motors laying on the ground, so there's a silver lining and that’s that we get to race again in a few days. I'm confident we'll get back on track.” 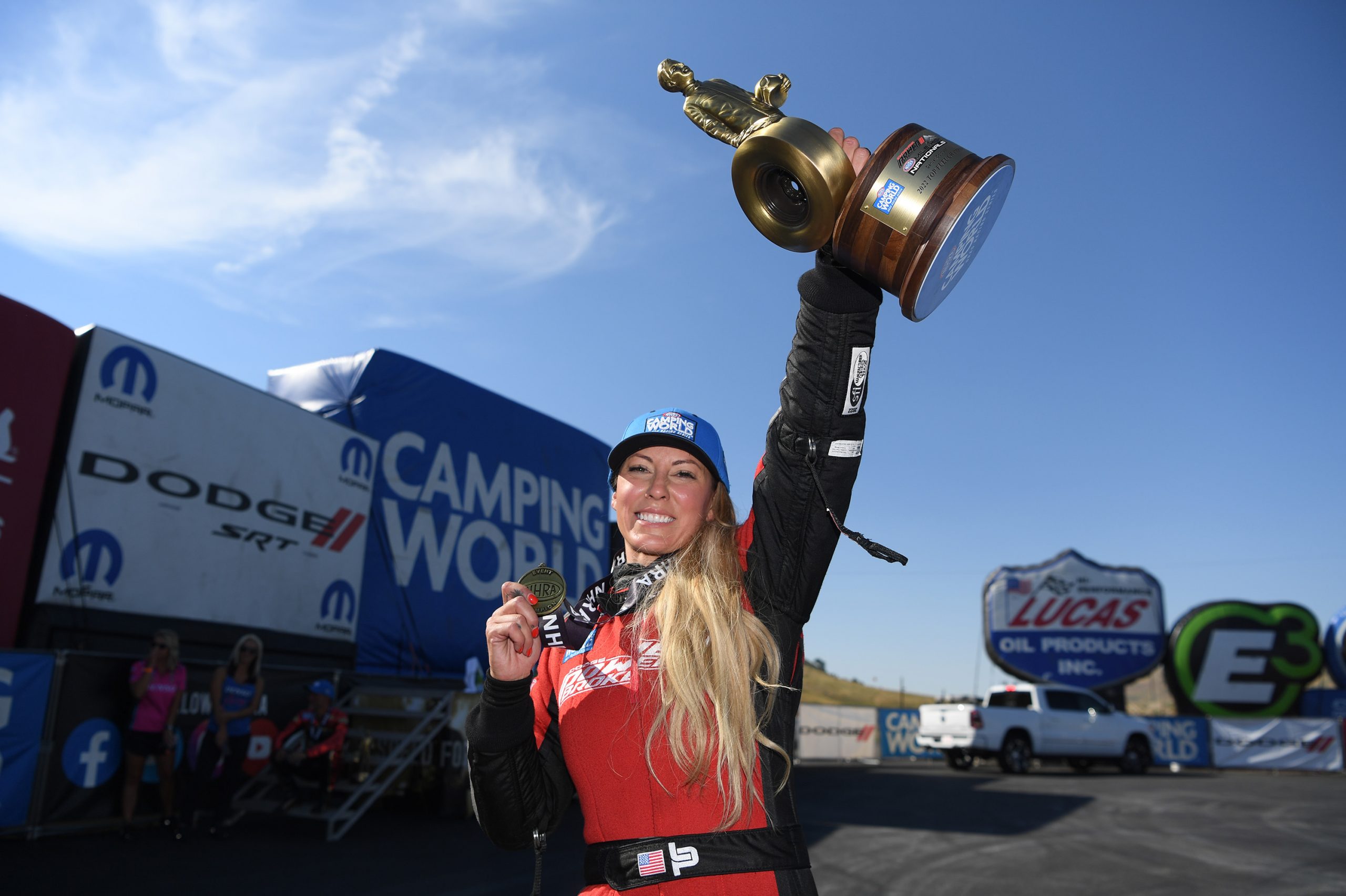